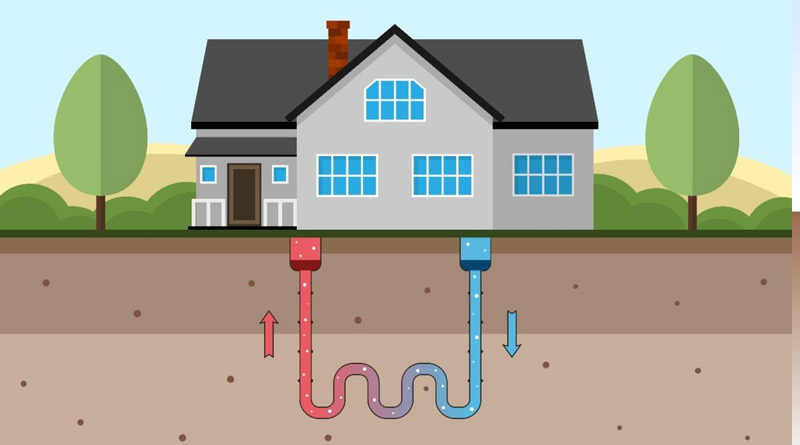 A new heat pump developed by Hallowell International is helping to bring geothermal energy efficiency and savings to existing construction and older homes. Until very recently, the cost of retrofitting existing and older homes for geothermal heating and cooling made upgrading to a geothermal system impractical if not impossible.

With a retrofitted geothermal heating and cooling system, extensive trenches have to be dug for geothermal underground pipes, and some existing homes simply don’t have the yard space required even when the homeowner has the money to install the system. A conventional high-efficiency heat pump that uses air can still help older homes lower heating and cooling costs, but the savings aren’t nearly as great as with geothermal.

However, the Hallowell Acadia new heat pump costs 40% less to use than other above ground heat pumps, and provides heat for less than one third of conventional electric resistance heat (that is, any heating system without a heat pump attached). This puts the new heat pump well within range of geothermal savings without the need to actually install a geothermal system. The Hallowell Acadia heat pump also uses a specially developed 410A refrigerant that does not damage or degrade the ozone layer, so it is environmentally friendly over and above its energy savings.

The new heat pump created by Hallowell has another advantage over geothermal beyond the more affordable installation costs. A major drawback of geothermal heating and cooling systems has always been that they work better in the winter in areas in which the temperature does not fall below 30 degrees.

The new heat pump designed by Hallowell includes a second compressor built that kicks in at very low temperatures to make the refrigerant inside much colder and more able to absorb very cold air. This means that the Acadia, the new heat pump by Hallowell, is actually 200% efficient down to temperatures as low as 15 below zero! The good news then is that cost of the new cold-air heat pumps is about one third that of installing a comparable geothermal system in an existing home. The bad news is that the new heat pump is about twice as expensive a conventional high-efficiency above ground heat pump.

So for example, if you are currently paying $3000 per year to heat and cool your home, subtract the $900 (approximately) that you would pay with the new heat pump installed, for a projected savings of $2100 per year. If the new heat pump costs $4,000 (a new geothermal system costs between $10,000 and $15,000 on average so that$4,000 is an entry level cost), you will recoup your investment within only two years.

Cleary, over the long haul, such a system is much, much cheaper than installing a conventional heat pump that costs $2,000.

The new heat pump designed by Hallowell is relatively new, but as more high-efficiency above ground models are developed and come on the market, the price will likely go down. Since heating and cooling are the two biggest energy demands a homeowner faces, this is definitely a welcome bit of good news.