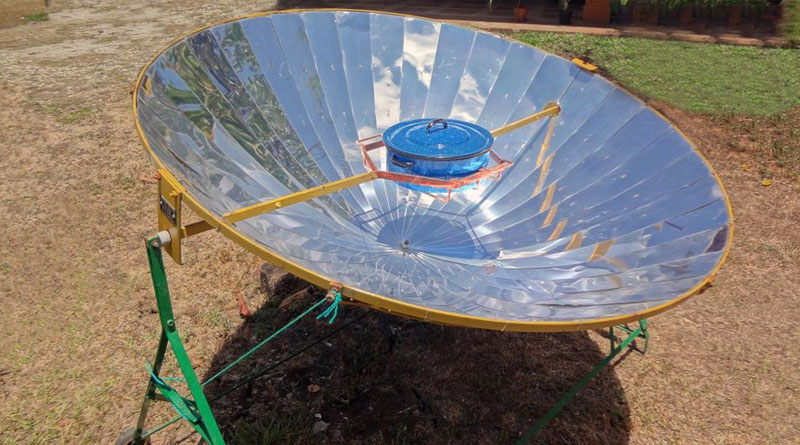 Food is placed in a pot in the center of the reflector which then concentrates the heat of the sun to cook the food. Different types include spherical reflectors, parabolic reflectors, parabolic reflectors combined with a cylinder (like a small oven) and planes of flat interrelated mirrors. Another kind of solar cooker concentrates heat from above, focusing it like a lens. Lens-type solar cookers are some of the most popular and interesting commercially produced appliances. Many campers use a variation of this type of solar cooker called a panel cooker. A panel cooker is a sheet of metallic material that unfolds to create lots of interconnected reflective surfaces. To cook food, pots and pans are placed on the reflector just like a stove.

Another easy-to-make solar cooker of this type is the funnel solar cooker which can be as simple as a sheet of metal rolled into a funnel shape and set in the sun. The pot for the food is then set in the center of the funnel to cook the food with no fire and no electricity. A solar box cooker is simply an insulated box, often built into the sunny side of a house with a glazed glass top. Food is set in the box in a pan, and then cooks over time much like a crock pot. Sometimes a solar box cooker is combined with a reflective panel to increase its capacity to focus heat. Box-type solar cookers have been in existence for many years and are widely used in home applications. Finally, an indirect solar cooker is a solar cooker concentrates the rays of the sun to heat a tank of oil or water, which is then used to store energy to cook food. This category of solar cooker includes a variety of applications such as biogas digesters, chemical cookers and solar hot water heaters. The sun in this case is used to create the energy to power whatever secondary source actually cooks the food (biogas, hot water, a chemical reaction) instead of cooking the food directly.
Even if you never use a solar cooker at home, it makes good sense to have one or several on hand: one to keep in the car, one to keep in the garage and maybe a spare packed away in a pantry or cupboard. A solar cooker is a remarkably efficient and effective way to make a meal during a power outage or while traveling or camping when no firewood or gas is readily available.