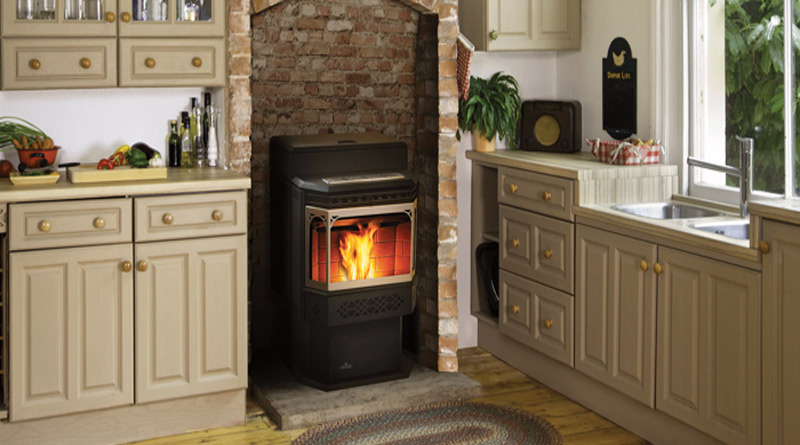 Home heating oil and natural gas prices both keep rising, and as result many people are exploring the benefits of owning a corn burning stove as a way of saving money and even reducing carbon emissions. Installing a corn or grain burning stove is an economical and practical way to either supplement a more expensive home heating system or replace it entirely.

Dried corn is a renewable resource that is inexpensive and readily available, especially in the interior region of the United States.

Dried corn can be purchased ready to use and, unlike wood, does not have to be chopped, cured, or stored at home before it is ready to be burned.

Dried corn burns so cleanly that only 2% of it is left over as ash. When burned, two buckets of dried corn produce less than two pounds of left over ash.

A corn burning stove can be installed without a chimney and vented directly outside, making do-it-yourself installation simple and safe.

A corn burning stove produces no pollutants and in fact is so clean to use that these stoves are exempt from EPA emissions standards.

Unlike a wood stove, a corn burning stove requires little to no clearance and only gets hot on the front door of the stove, so it is safe to operate around children and pets.

A corn burning stove for an average sized home will generally cost less than $2,000, which is far below the cost of most gas or oil furnace systems. Most of these stoves do require a hearth or nonflammable surface upon which to stand, but such a hearth can be made out of inexpensive stone tiles set onto plywood, or you if you prefer you can purchase hearth stands already made.
Even if you only use a corn burning stove as a supplemental heat source, or as a way of heating a garage, pole barn, or outbuilding, significant cost savings over gas or oil occur fairly quickly. It doesn’t take long to recoup the cost of the stove itself, the corn, and installation (which is easy and relatively quick).

Some pellet stoves, called ‘multi-fuel stoves’, have the ability to burn corn, grain, fruit pits, or pellets, or even a combination of these renewable fuels. A corn pellet stove can be ordered at most big box home improvement stores, or from an online supplier, or a specialty home heating retailer (such as a fireplace and stove store).

If you live in a part of the country where dried corn in readily available and many people do, a corn pellet stove is a good investment. Order early though: in recent years fall orders have been so great that some parts of the U.S. have been selling out of corn burning stoves long before first frost.